Bitcoin critic Peter Schiff impressed by how BTC is holding up

The world’s largest cryptocurrency Bitcoin (BTC) continues to show strong volatility along with the U.S. equity market. On Wednesday, all three major indices on Wall street tanked by over 4 percent with a similar spillover coming to the crypto space.

The Bitcoin (BTC) price took a dive under $29,000 clearly suggesting that any upside could be shaky at this stage. Taking a jibe, Bitcoin critic Peter Schiff expressed surprise on BTC holding up well over the last week. He also hinted that this is not the bottom and more pain is still left. Schiff wrote:

I must admit that I’m surprised that Bitcoin has held up this well. But don’t get cocky #HODLers. The market never gives investors this much time to buy the bottom. It’s more likely this is a bull trap to lure in as many more buyers as possible before the next major leg down.

The Bitcoin critic also touched down on the part of global macros and rising inflation. He noted that Bitcoin will become even more volatile and vulnerable as food and gas prices increases. With this Schiff wanted to snub the opinion that Bitcoin serves as a hedge during times of uncertainty. He added: “Rising #food and #gasoline prices will put more downward pressure on Bitcoin prices. That’s because grocers and gas stations won’t trade their food or fuel for Bitcoin. So if Bitcoin #HODLers want to eat and drive soon they’ll be forced to sell their precious sats to afford to!”

Bitcoin has been struggling at around $30,000 levels. Bloomberg has shared a technical chart pattern for Bitcoin explaining:

Bitcoin, which which has rebounded about 15% from its crash lows of last week, is looking increasingly vulnerable to another drawdown. The bounce has traced a so-called “saucer top” formation on the hourly chart, within which a bearish “head and shoulders” top has been activated due to the price falling back below the neckline. The pattern suggests Bitcoin would have to advance past $30,800 to shrug off the technical downside risk. 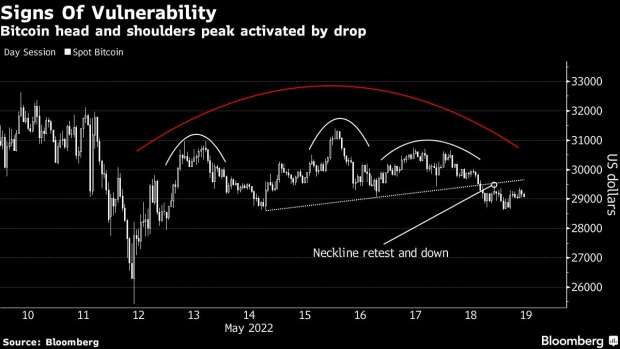 Bitcoin has been closely following the Nasdaq 100 index which has been on a free fall over the last few months. On Wednesday, Nasdaq corrected 4.7 percent losing over 500 odd points and tanking under the crucial support levels of 21,100. The next support for Nasdaq is at 11,000 levels.

This means that if Bitcoin follows the equity space, it could be poised for an even bigger correction. If BTC holds to fails the $28,000 support, it can lead to a crash all the way to $22,000. Many have been predicting that if the U.S. enters recession, $20,000 per BTC is very much possible.

LBank CMO Reveals Why the Future of Web3 Lies in Japan

Will Shiba Inu’s Shibarium launch on the 14th of February? Lead developer…

Mosdex Provides Solution to Volatility in the Crypto…

OneCoin Founder Ruja Ignatova Is Back After 5 Years