On Monday, June 13, Satoshi Street witnessed one of the most brutal corrections in the history of the crypto market. Bitcoin started correcting beginning at the weekend after the U.S. released its inflation data last Friday.

However, the freezing of withdrawals by the Celsius Network led to an even deeper correction on Monday. The BTC price collapsed by more than 17 percent in a single day, crashing to a low of $22,000. With this price correction, BTC has tanked more than 70 percent from its all-time high.

Such deep corrections have been the nature of the past bear market cycles of BTC. However, it would be difficult to say whether things can turn for the good from here onwards. The global macro setup looks gloomy with the Fed likely to turn even more hawkish amid soaring inflation. Well, this has further escalated the chances of the U.S. slipping into recession. With Bitcoin and crypto being risk-ON assets, we can see more money flowing out of this asset class.

If Bitcoin slips below $20,000, it could further correct all the way to $15,000 and even below. Analysts have been giving different predictions for the bottom but it’s for the market to decide.

Bitcoin entering the darkest phase of the bear market

On-chain data provider Glassnode says that we are probably entering the darkest phase of the Bitcoin bear market. For this, Glassnode draws a comparison of the current bitcoin price approaching its realized price. The data provider notes:

The Realized Price (at $23,430) is rarely visited by spot prices outside the deepest and latest stages of bear markets. March 2020, and the end of the 2018 bear market were the last instances where the market was on aggregate holding an unrealized loss. 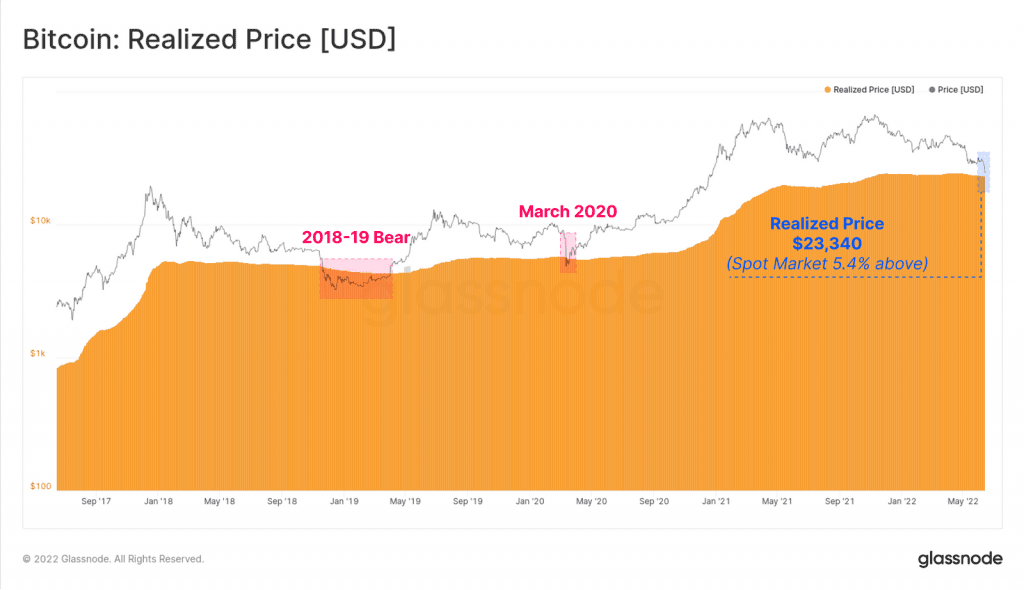 As we can see in the above image, the Bitcoin price can stay under its realized price for a long time during the 2018-2019 bear market. Although it bounced back during the 2020 bear market quickly, this time could be different.

Back in 2020, the U.S. inflation was at 2 percent and so the Fed had the leverage to print more money. With the U.S. inflation skyrocketing and the U.S. undergoing a recession, the Fed doesn’t have enough leverage on money printing this time. Thus, Bitcoin could stay in the bear market zone longer than expected.

As the crypto market cap dives under $1 trillion in more than a year, heavy liquidations took place in the broader crypto space. As per data from CoinGlass, more than $1.25 billion in crypto positions were liquidated on Monday. Bitcoin contributed to most of the liquidations at over $600 million while Ethereum was the second-largest contributor at $480 million.

For long-term holders, it could be a good time for building fresh positions as the Bitcoin Fear and Greed Index drops to the zone of “Extreme Fear”.

The Kii Foundation is Partnering with NuID to Launch $Kii, the Utility Token for Digital Identity

Stablecoins and CBDCs will be Integral for Payments