Can anyone save LUNA anymore? A few days ago, many were confident that founder Do Kwon would come up with a plan, or that big money would swoop in and save the day or that even the market would self-correct. But now, the answer to this question seems to be a resounding no! LUNA has now lost 99.9 percent of its value and has sunk to $0.03 at press time.

In the past day alone, the cryptocurrency lost 98 percent of its value to slip from a high of $5.4 to now change hands at $0.031, putting its market cap at $78 million. For context, this is lower than Decentralized USD (USDD) a stablecoin project that launched just weeks ago on the TRON network. 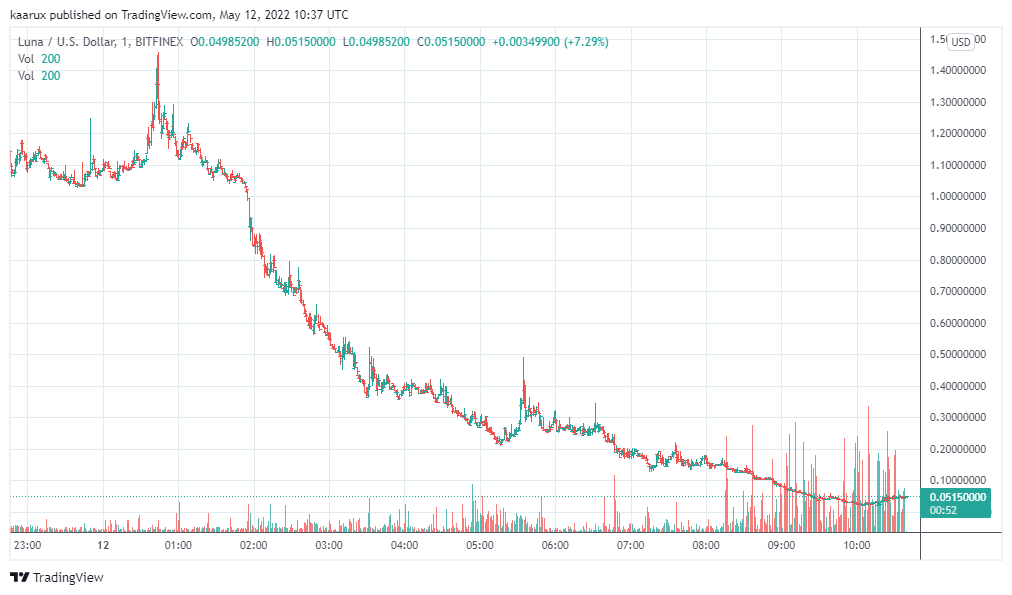 At a time like this last week, LUNA was trading at $85 with a market cap of $30 billion, showing just how fast the market can turn.

LUNA is the crypto that everyone is talking about, understandably so. As such, regulators have taken note. In a Senate hearing this week, US Treasury Secretary Janet Yellen brought up the woes of LUNA and its sister project UST

I would note that there was a report just this morning … that a stablecoin known as TerraUSD had experienced a run and had declined in value. I think that simply illustrates that this is a rapidly growing product and there are risks to financial stability and we need a framework.

Yellen was responding to a question from Pat Toomey, the Senate Banking Committee’s seniormost Republican. On his part, Toomey told reporters that he believes crypto shouldn’t be judged on the merits of UST. He believes that UST is an outlier and that other stablecoin projects like Tether are much better off. As CNF has explained in the past, Tether, USDC, Binance USD, and other top stablecoin projects are backed by US dollars in reserve, unlike UST which is backed by smart contracts that link to a LUNA burn and mint mechanism.

Still, the Senator believes UST could very likely collapse to the ground. He stated:

It does make sense that this episode with Terra would refocus attention on stablecoins generally. And, by the way, failure should be an option. It’ll probably take some failures in this space in order for the market to figure out what works.

As the LUNA ship sinks, it would appear no one wants to have any links to the project.

Recently, a rumor sprung up that suggested big pocketed VCs were behind the LUNA price dip. It was speculated that BlackRock and Citadel had borrowed 100,000 BTC from Gemini and swapped some of it for UST before dumping both. Even Charles Hoskinson, the Cardano founder had jumped onboard and was among those who spread the rumor on Twitter, but he has since then deleted the tweet.

Gemini denied the rumors in a tweet and dismissed any links to BlackRock and Citadel.

We are aware of a recent story that suggested Gemini made a 100K BTC loan to large institutional counter-parties that reportedly resulted in a selloff in $LUNA. Gemini made no such loan.

Debates About How to Interpret Felix…