Pharmacist is Using Crypto to Feed Thousands of Homeless People

According to Kenneth Kim (a pharmacist based in Pennsylvania), one of his lifelong ambition was to “use crypto to improve the world.” A few years ago, he got the idea for his program. Then, he launched the program (known as crypto for the homeless, CFTHL). Kim registered his not-for-profit firm with new jersey. Since its inception, the firm has fed over 5,000 homeless persons globally using virtual currencies.

“I have always wanted to run a program that is crypto-related. My main objective is for such a program to make our world a better place,” Kim told popular online media firm, Cointelegraph. Kim had always wanted to feed the homeless since he was a pharmacy student at temple university Philadelphia.

During this period in the school between 2018 and 2021, there were always lots of homeless people on the route between Kim’s home and the campus. This period coincided with the release of the blade runner 2049. It describes an imaginary future where the world’s population keeps increasing due to improved technology.

However, there is still an increasing gap between the poor and the rich. Also, the homeless in the movie weren’t begging for money; these homeless wanted digital credits. “My understanding of the movie is that the world has fully accepted that digital currencies are now a part of our world. Hence, the beg for digital credits.”

How this movie inspired Kim’s idea

This movie gave Kim the idea that he could receive donations with crypto. Then, feed the homeless with those donations.

After watching, I thought it might be possible for me to use these digital currencies to receive funds. Then, purchase food with those funds to feed the homeless.

Kim’s dream became a reality when he fed four Philadelphia homeless on April 29, 2019. Since then, the CFTHL has fed thousands of the homeless within and outside the US. Apart from crypto donations, a tireless volunteer network has also contributed to the success of this firm in the last three years. 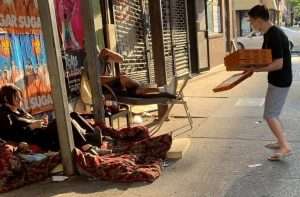 According to Kim, he chose to receive donations with crypto because authorities can’t freeze or lock away those funds. Kim has had many of his funds frozen by PayPal in the past. Hence, he concluded that the best way to avoid repeating his PayPal experience is to receive funds through crypto.

According to him, using any centralized payment method would bring trouble sooner or later. There is another important reason Kim chose to receive funds for CFTHL with crypto. He could easily send funds to his volunteers in any part of the world.

The firm has expanded its volunteer network globally using a simple model. In this model, the CFTHL expects volunteers to buy hot meals and deliver them by hand to the homeless within their environment. Then, they would provide proof of the amount of food they purchase and the receiver of such foods using pictures or short videos.

The CFTHL team would verify such claims and compensate those volunteers using crypto payments. Volunteers can receive their compensation using any digital assets of their choice. Using crypto to make these compensations, Kim and his CFTHL won’t need to worry about paying extra charges on the funds they send.

Re-introducing the human aspect to charity

Part of Kim’s statement on the firm’s third anniversary reads, “the CFTHL doesn’t aim to give shelter to the homeless. Rather, its goal is to re-establish the charity nature of human beings. Most other projects lack this important nature.” The CFTHL team won’t compensate any volunteer who doesn’t hand-deliver the food for the homeless.

According to the firm, the goal is to make the homeless feel important regardless of where they live. Donors can track how their funds are spent through a public ledger provided by the CFTHL team. This public ledger includes all the funds the organization has ever received.

There are only two full-time CFTHL employees. However, it has about 20 volunteers regularly working with the team. Since April 2019, the CFTHL has received crypto donations worth about $75,000. Despite his role in the organization, Kim is also a full-time pharmacist at CVS pharmacy, Pennsylvania.

Kim still wants his CFTHL message to spread across more countries. Hence, he seeks at least three more volunteers in the next couple of years. Some of his volunteers have fed the homeless in India, Canada, Thailand, Australia, Paraguay, New Zealand, and Nicaragua.

Goldman Sachs: Bitcoin is by far the best-performing asset in the world – Can…

Nifty Gateway Co-founders to Step Down amid Gemini…

Bullish for Bitcoin and the whole industry: GDP…

Tesla Holds Onto Its Bitcoin Holdings despite Crypto…