There may be hope for Terra’s UST stablecoin after all. One of the largest asset managers in Switzerland has announced that it’s in talks to invest up to $3 billion in the project to revive it and bring it back to its $1 peg at a time when it has collapsed and brought down LUNA with it.

UST is an algorithmic stablecoin that depends on smart contracts and the free market to maintain its peg to $1 (although this might change in the near future). Its value depended on arbitrage traders minting LUNA when UST exceeded $1 and burning it when UST was below the dollar, until the house of cards all came crashing down.

GAM wants to save the project. The Zurich-based company, which is listed on the SIX Swiss Exchange and has $95 billion in assets under management, stated in a press release today that it intends to invest between $2 and $3 billion “to absorb excess supply of UST during its current selloff. The move seeks to re-establish UST’s peg to the US dollar.”

We firmly believe in Terra’s ecosystem. Just as importantly, we believe in UST’s algorithmic approach to valuation. When investors have proper incentives, they naturally trade in ways that maintain price stability. When black swan events impact markets, opportunities blossom. We see opportunity in UST’s recent activity, and continue to see promise in Terra’s broader strategy.

The news comes just days since it was reported that Do Kwon was in talks with several big-pocketed investors over a bailout. However, not all big investors want to be linked with the failing project. The world’s largest investment manager BlackRock denied any links to UST, with Citadel Securities, yet another major firm that even has links to crypto, following suit.

After my show today where I discussed the rumors that Citadel was involved in the LUNA attack, I was contacted by Citadel and they denied having any involvement. I have afforded them a chance to come on the show tomorrow and address this directly. pic.twitter.com/58egYiVVwu 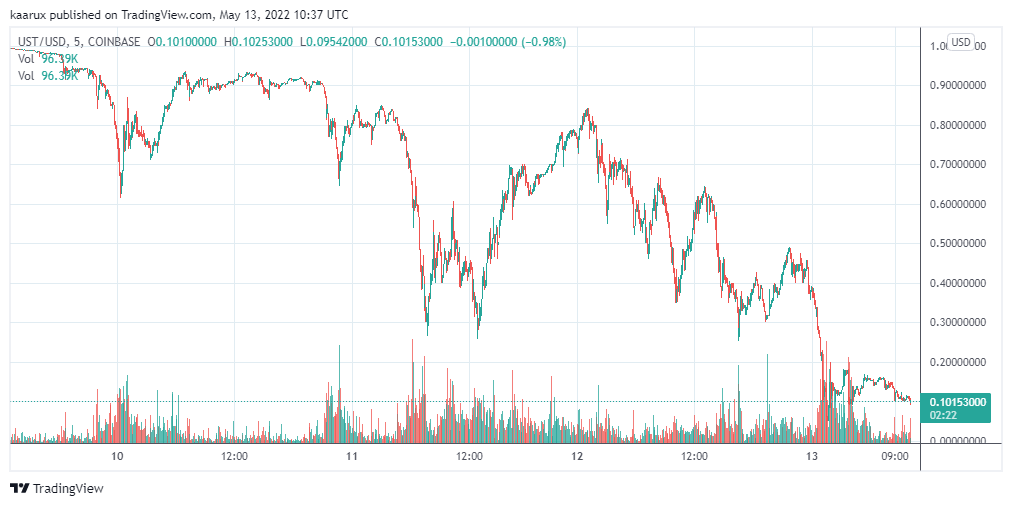 (UST’s price performance since May 10).

Arthur Hayes Deserves More Than a Year in Jail: US Prosecutors

Bullish for Bitcoin and the whole industry: GDP…

Coinbase fined for operating in the Netherlands:…